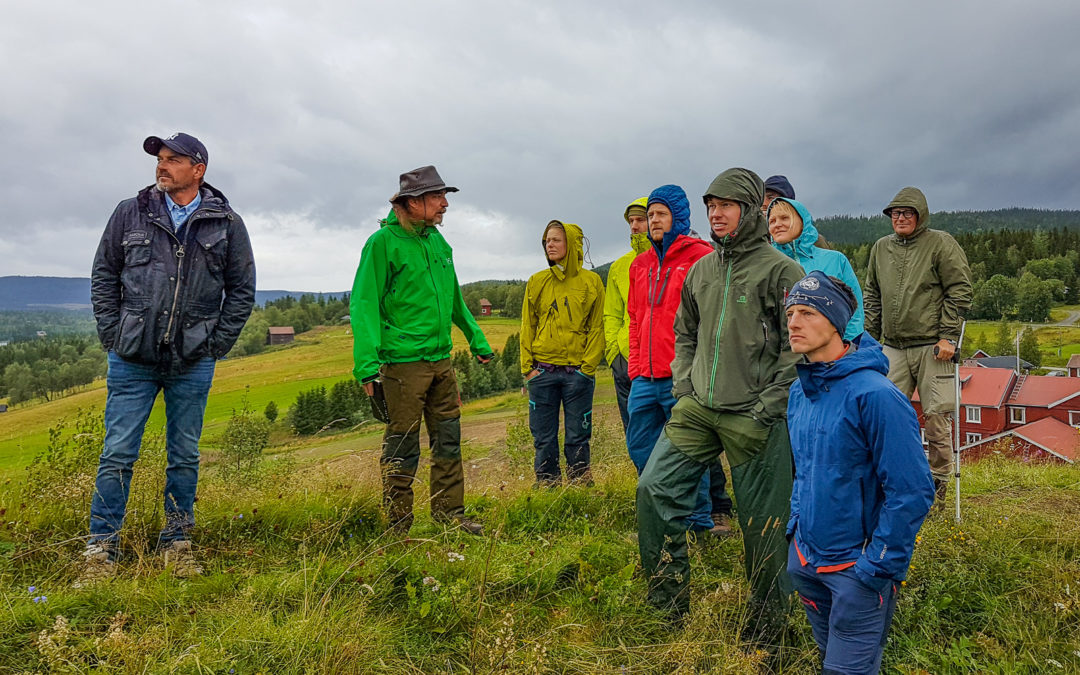 On August 10-12, I was honored to host a group of 14 Sweden Chapter members and friends in my current home village – Åre – the Adventure Capital of Sweden. The occasion was our annual excursion that usually takes place over a weekend. Åre is located in the heart of the Swedish mountains and is the cradle of mountain tourism in this country. The mountains have historically been the stage for both triumph and tragedy. The date of the excursion was chosen because it marks exactly 300 years since the beginning of general Armfeldt’s military campaign towards Norway in 1718. On August 9, 1718, a Swedish army consisting of 10,000 men had gathered in Duved, west of Åre, for departure towards Norway a few days later. A few months into the campaign, the Swedish king Charles XII was shot dead and general Armfeldt was ordered to retreat to Sweden. The soldiers were poorly dressed and it was in the middle of the winter, but still he chose to cross over the mountains. They were hit by a snow storm and 3,000 men froze to death, with 700 more dying after coming down from the mountains – one of the worst catastrophes in Scandinavian history, with an immense impact on the region.

The main event was an excursion in the footsteps of Armfeldt led by Anders Hansson, Chief Archaeologist of Jamtli Museum, and the rest of the weekend also had a historical and archaeological theme. Hansson is a true expert on the Armfeldt campaign and have authored a popular book on the subject. He guided us to historic places connected to these dramatic events and gave us a deeper understanding of the history behind the catastrophy and the campaign. Prior to the field excursion he showed up in a handmade replica of a Carolean uniform and held a lecture that gave us the full background on the story.

Two of our other distinguished guests were Maria Nilsson FI’18 and her husband John Ward FI’18. They have for many years organized archaeological expeditions to Gebel el-Silsila in Egypt. Their project works towards changing previous misconceptions, and in conducting a comprehensive archaeological study the aim is to increase the general awareness of the site’s importance and unique legacy. Before the three course dinner held at Hotel Granen, that was our base camp for the weekend, Nilsson gave us a fantastic lecture about some of the remarkable discoveries made recently. Those includes a crocodile-temple (Temple of Sobek); two newly excavated shrines with six life-sized statues (cenotaphs that previously were thought to have been completely destroyed); and the most recent discovery of the New Kingdom Necropolis. Connecting to Åre’s rich history of Swedish mountain culture, I gave a lecture myself about Sven Hedin’s role in the history of mountaineering. This research is based on my flag expedition to Muztagh Ata in Xinjiang, China in 2015. Hedin actually traveled through Åre in 1887, when his family made a train trip to Trondheim in Norway. The railway line between Trondheim and Östersund was opened in 1882. It was the start of a development that transformed Åre from a traditional farmer village to the international tourist resort it is today. The cradle of Swedish mountain tourism lies in Jämtland and in 1895 Åre got its first tourist hotel. Åreskutan is one of Sweden’s most frequently climbed mountains, and in the nearby Syl massif, the Swedish Tourist Association built its first mountain station. The first alpine climbing courses in Sweden were held in Sylarna, and Jämtland can therefore also be said to be the cradle of Swedish Alpinism.

Martin Edström and Katja Adolphson with company at Tännforsen.

On the first day, we followed the early mountain tourists’ footsteps up to the summit of Totthummeln. The main summit of Åreskutan was hidden in clouds and it was raining and very windy. After an extremely hot summer the weather changed completely to cold and rain, but fortunately that did not stop our group of explorers and the weekend was very successful. We also visited the largest waterfall in Sweden and one group went white water pack rafting on the river on the last day.